With a strengthening US dollar and depreciating local currencies, dollar-denominated debt of low-income countries suddenly becomes much more expensive to repay. TCX has developed the HEAR ratio to show the impact of currency risk on sovereign budgets for health and education in Africa. 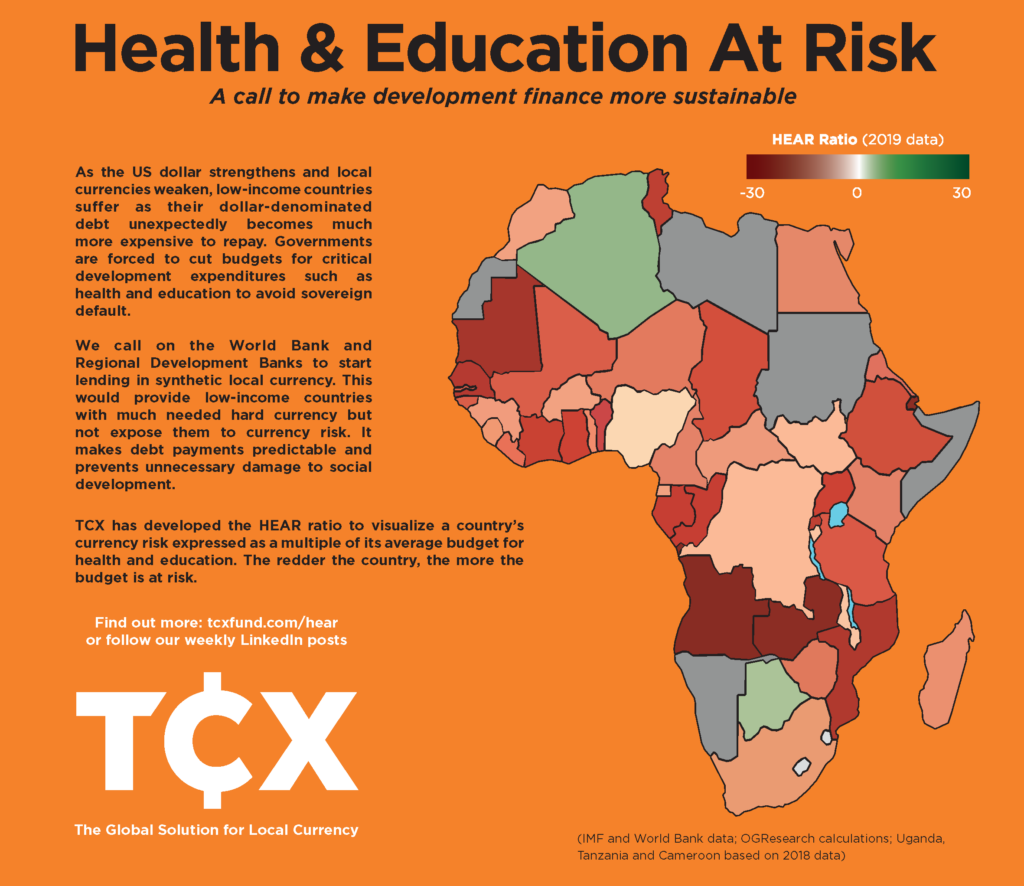 Example: the HEAR ratio of country XYZ is -7. This means that the country’s open currency exposure (in local currency) is 7 times bigger than the average annual budget for health and education. It follows that country XYZ’s dollar-denominated debt would increase by an amount equivalent to 7% of its average annual national budget for health and education, should its currency depreciate by 1% versus the US dollar.

If the currency of country XYZ (with a -7 HEAR ratio) would depreciate by 10% in a given year, its dollar-denominated debt would increase by a massive 70% of its average annual budget for health and education. This what we call the ‘HEAR test‘ which shows how much a country’s external (dollar-denominated) debt would balloon in case of an annual depreciation of 10%. Unfortunately, a 10% depreciation is not uncommon at all for emerging and frontier market currencies.

A third related concept is what we call ‘HEAR damage‘. Given a country’s HEAR ratio and the currency depreciation in the past calendar year, what is the actual ‘damage’ done – through its open currency exposure – expressed in units equal to its average annual budget for health and education?

The ‘HEAR damage’ is a concept we use in our weekly LinkedIn posts.

Synthetic local-currency finance should always be a borrowing option

TCX believes that borrowing countries should be given a choice to borrow in (synthetic) local currency as this results in predictable interest and debt (re)payments. However, the current common practice of borrowing in hard currency while not hedging currency risk often leads to ballooning debt. This could have serious consequences for government expenditures on, among other things, healthcare and education, which are crucial sectors for development.

For questions or comments, please contact us at info@tcxfund.com.

To calculate the HEAR ratio, we have used the following sources: